To honor this year's Chinese Zodiac animal the Snake, I offer this look at an interesting unique festival from the small town of Sekikawa in Niigata prefecture where they parade an enormous snake made of bamboo and straw. The snake is 82.8 meters long or about 271.6 feet and weighs about 2 tons requiring 500 people to carry it and is in the Guinness Book of World Record as longest snake made of bamboo and straw (wasn't aware there was such a category).

The festival is a type of Obon celebration - a time when the Japanese remember the spirits of the dead. It also is reminder of a terrible flood which hit Sekikawa in 1967 costing a number of people their lives. The date was August 28th which is why the snake is the exact length of 82.8 to reflect that.

As to why a giant snake, one has to dig further back into the misty past of Sekikawa. Legends say the area was troubled by a giant snake which had been a cursed woodcutter's wife.

Some centuries ago, a local woodcutter was attacked by a giant snake while he was out gathering woods. Giant snakes have been a common theme in myth and legend and perhaps represent a memory of large snakes which once lived in Japan long ago. The woodcutter killed the snake and deciding on not letting a chance meal go to waste brought it home to eat.

The woodcutter told his wife not to eat any of the snake meat till he returned from gathering more wood. The wife disobeyed him and ate a little of the snake meat. It was so delicious she couldn't stop eating of it and she ate the entire snake. Then she developed a powerful thirst. No amount of water could quench it. She drained all the water supply at her home and then the village's supply too. She went to river to slake her unnatural thirst but to no avail. It was there that the wife transformed into a giant snake herself. She left her family and the village forever - or so it seemed.

Some time later after her family had passed away a biwa player was passing through the area. He stopped to rest and while he did so he decided to practice his skills. The snake wife heard his music and was charmed by it. She approached the biwa player and praised his skill. The biwa player being blind as many biwa players were in those days thought he was being addressed by one of the local women. There was a strange musty smell in the air but he thought nothing of it.

The snake wife asked him where he was going and he told her to the village which is now Sekikawa. She warned him not to do so. She revealed to him what she was and that she planned to destroy the village. She only told him this because she was enchanted by his music and wished to spare him. The snake wife then told him not to warn the villagers or he would pay with his life.

The biwa player left very afraid. However, instead of running off he decided to go to Sekikawa and warn them. He told the chief of the village his tale. Some say the biwa player vanished because he was a helpful spirit but others say he died from the snake wife's magic for having told her secret.

The villagers eventually were able to kill the snake wife and they enshrined the biwa players personal effects in the local temple.

Centuries later in modern times it was thought  after the flood that perhaps the old snake wife's spirit was restless so the festival was held to appease her possibly angry spirit.

The festival began in 1980s and every year they parade two large snakes around the town. A smaller one is carried/dragged by children while the principle snake of 82.8 meters is carried by 500 people.

I was fortunate to bump into a local prominent citizen of the town who told me the story in his own words. He says he remembered the biwa player's items being on display when he was boy though they aren't now. I later had dinner with him and wife and several friends of his from Niigata City. Apparently for people of the town there are those who believe the story to be true - to a degree. It is interesting though the number of giant snake stories that abound in the ancient myths and the old legends of times closer to now.

Who knows? But as to the moral of the story with the woman who was changed into a giant snake for eating the snake her husband told her not to, I guess it would be -"Women, don't eat a man's snake without his permission" or something to that effect. 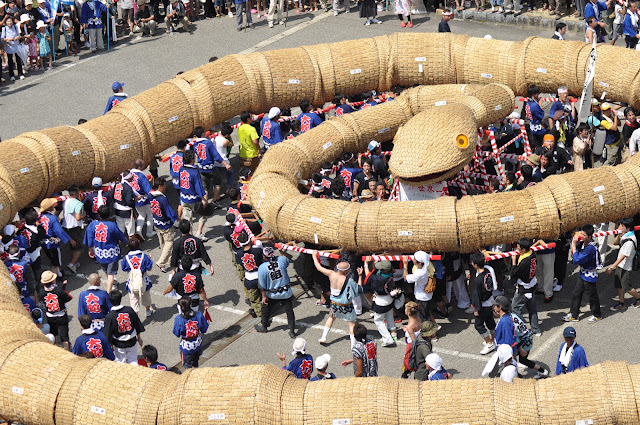 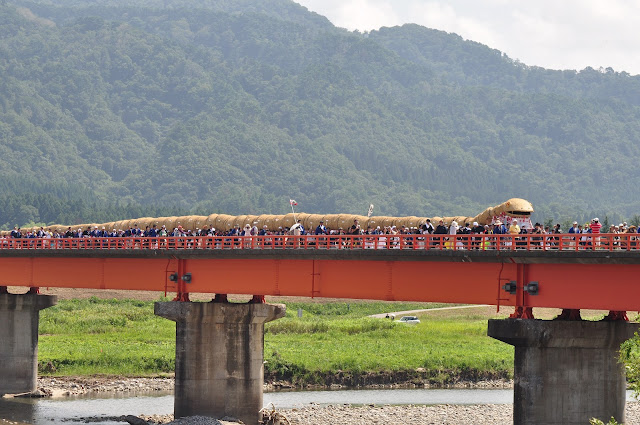 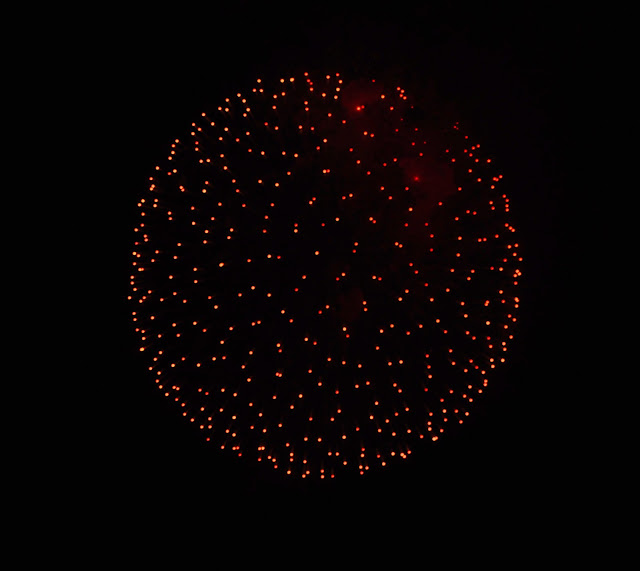 Fireworks the night before 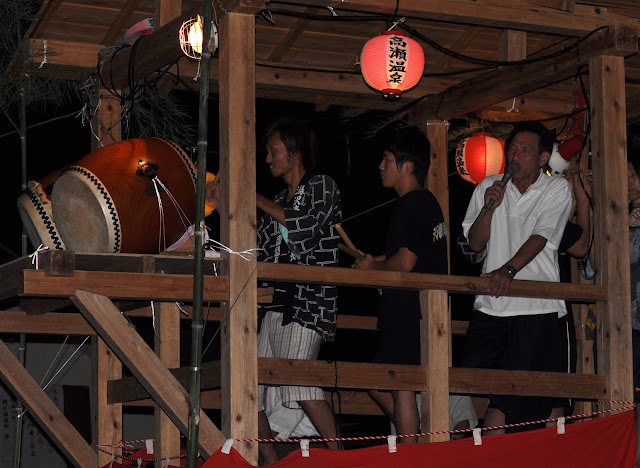 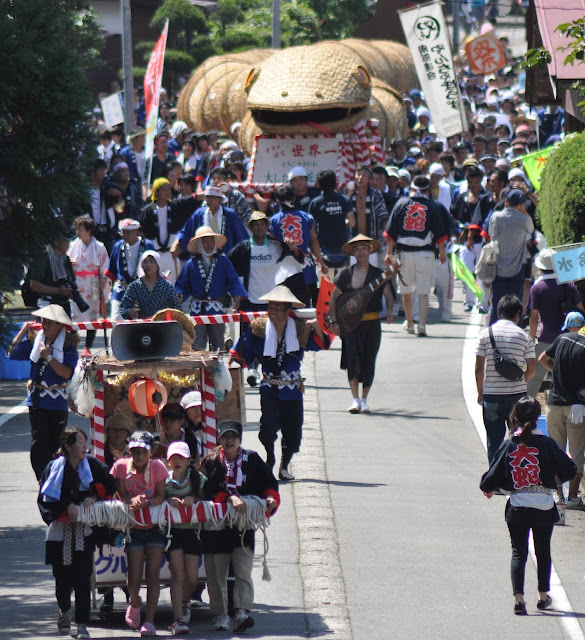 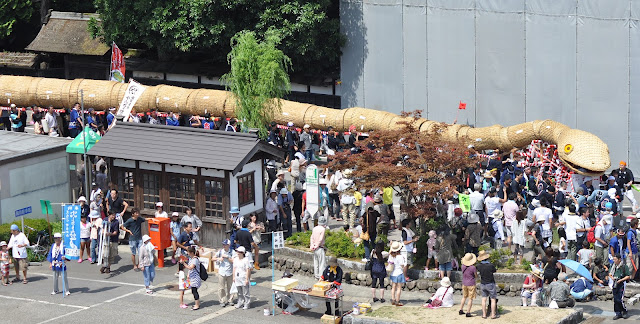 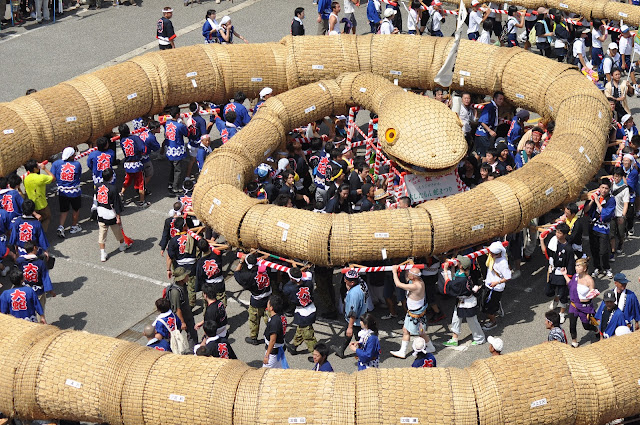 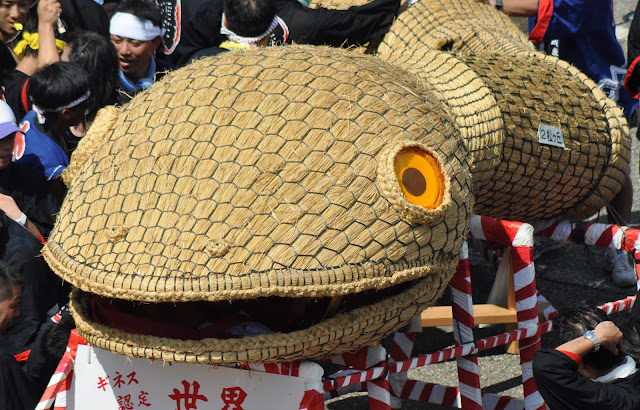 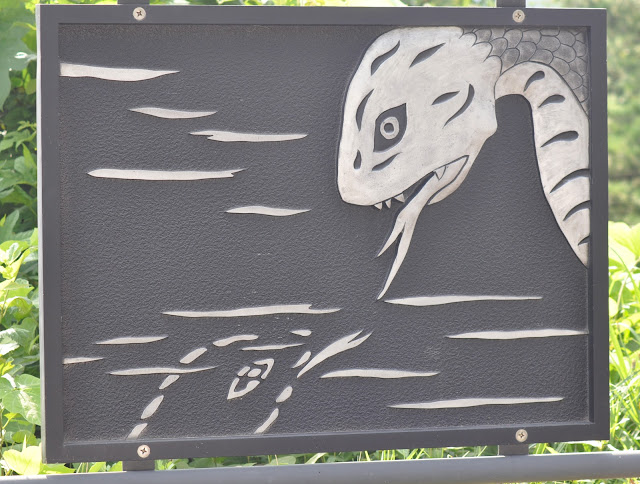 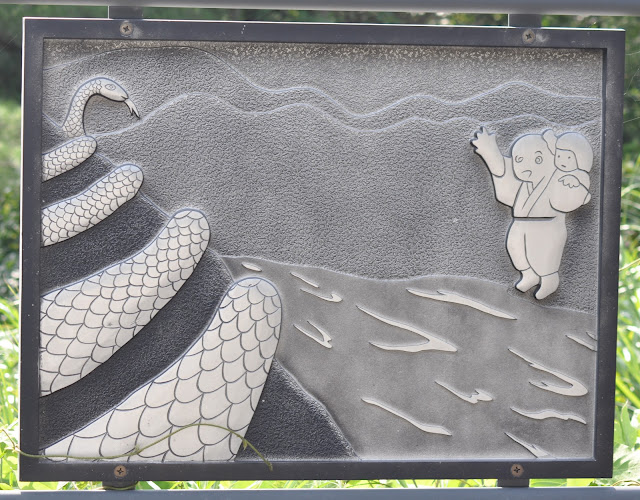 She leaves behind her family forever 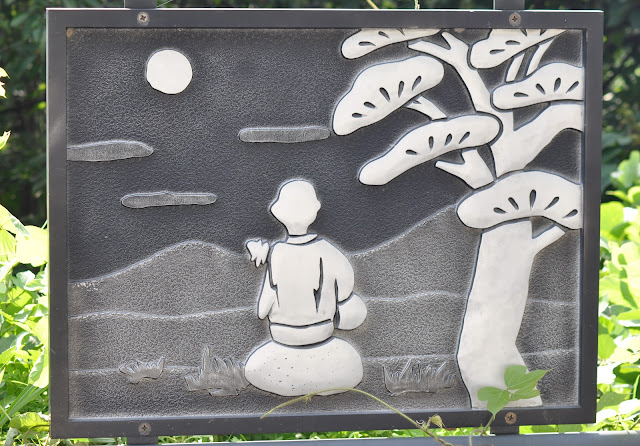 A Biwa player passes through the area sometime later 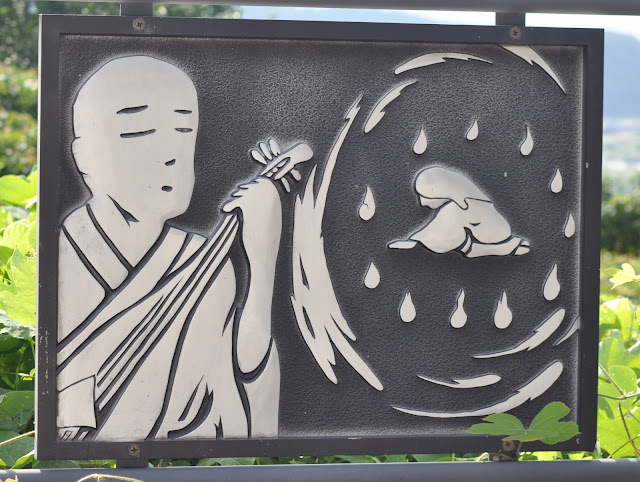 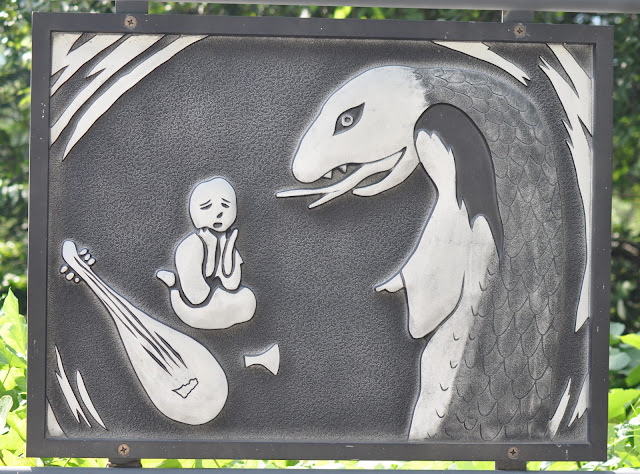 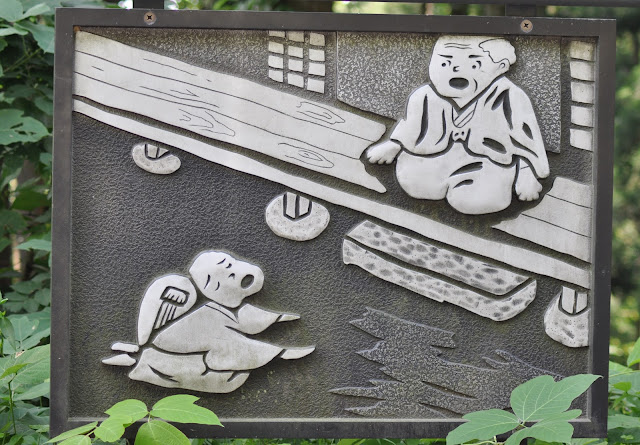 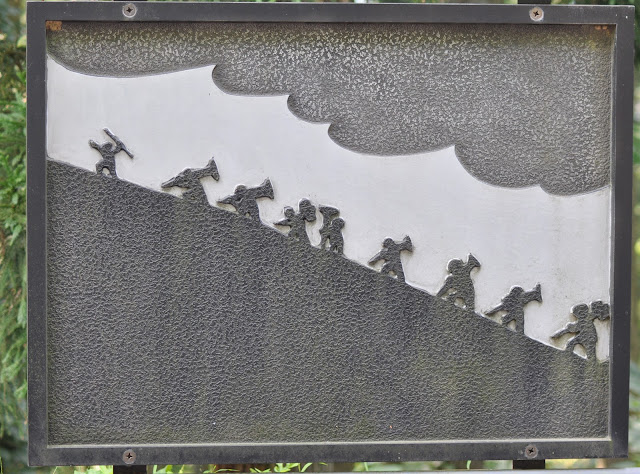 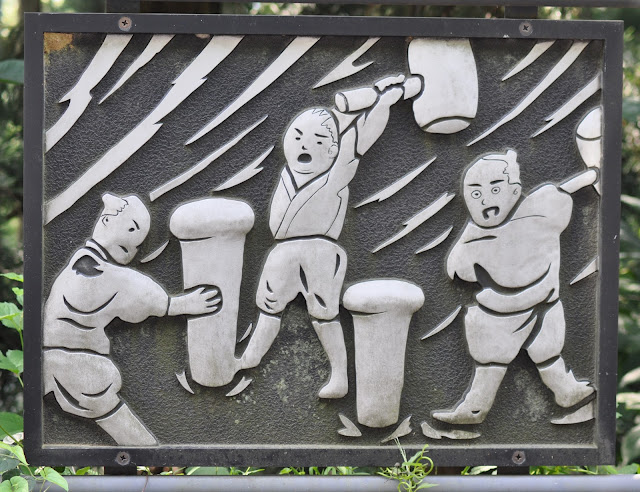 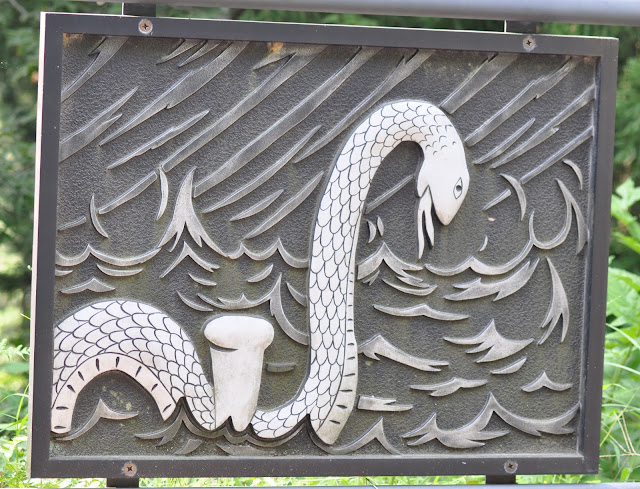 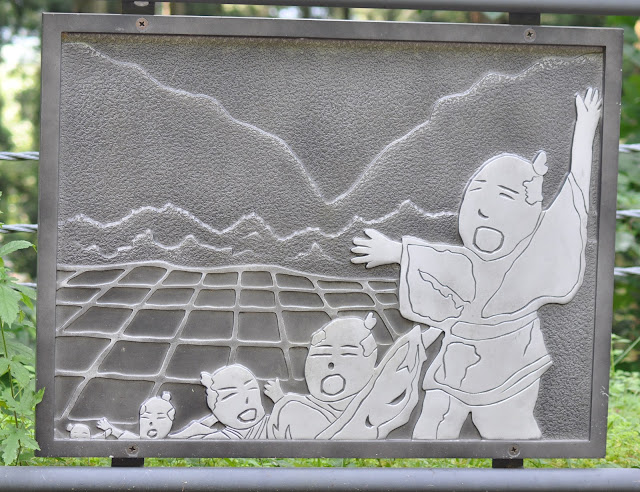 The Villagers celebrate their victory over the Giant Snake 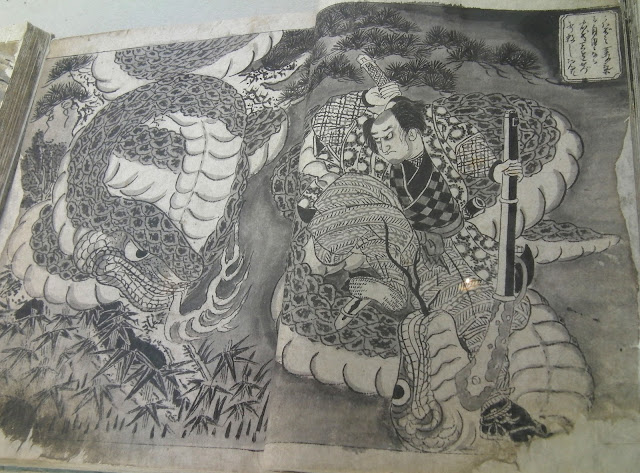 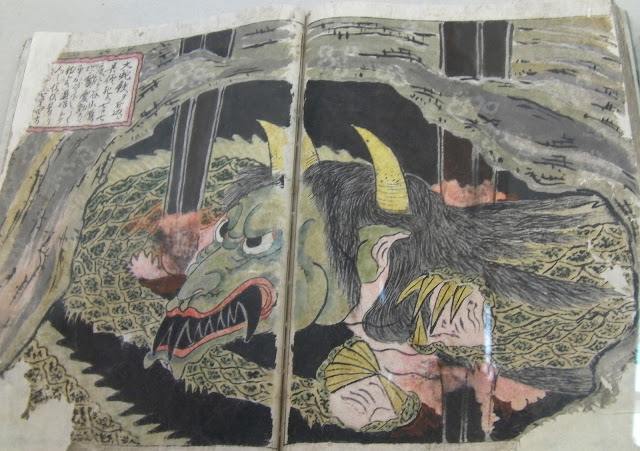 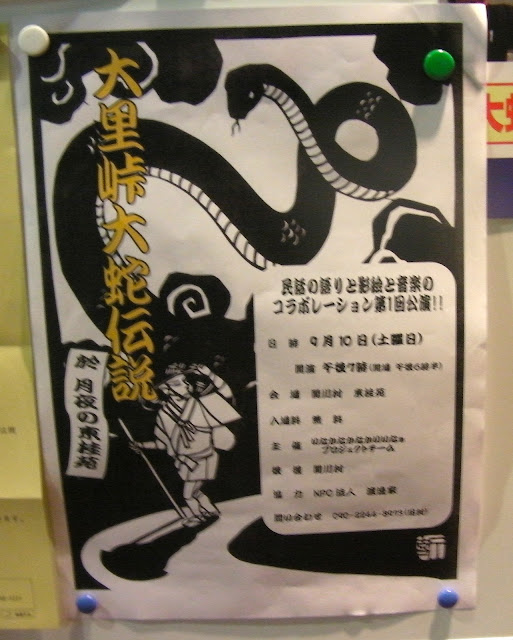 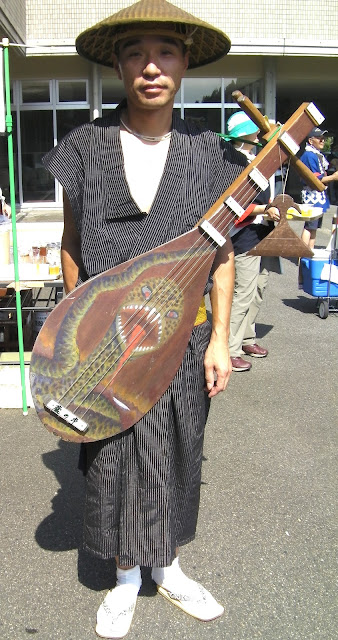 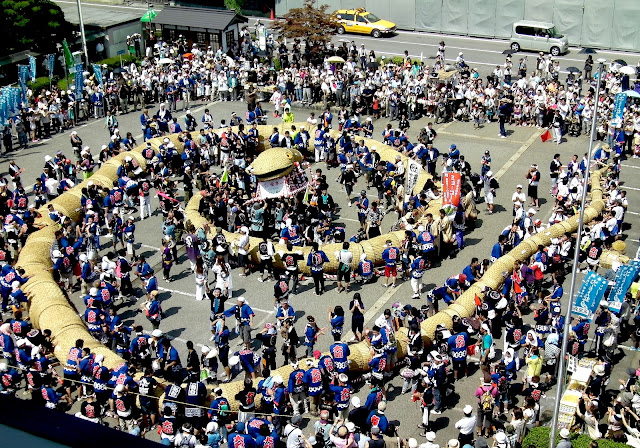 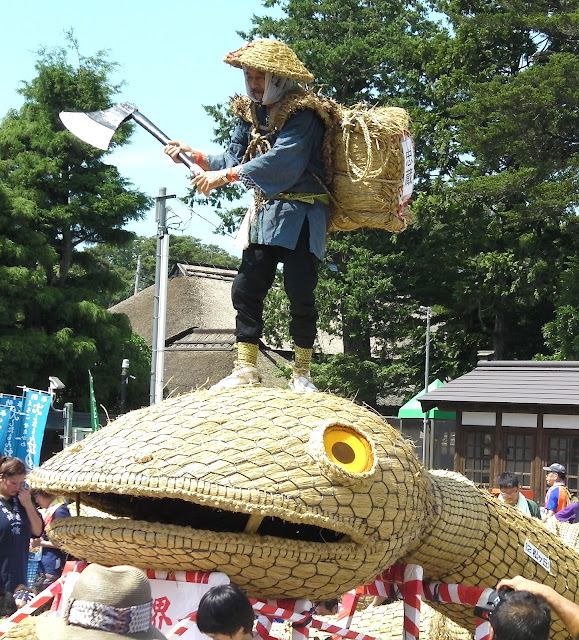 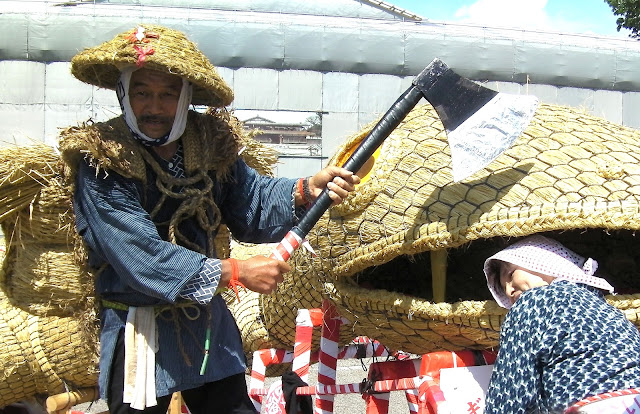 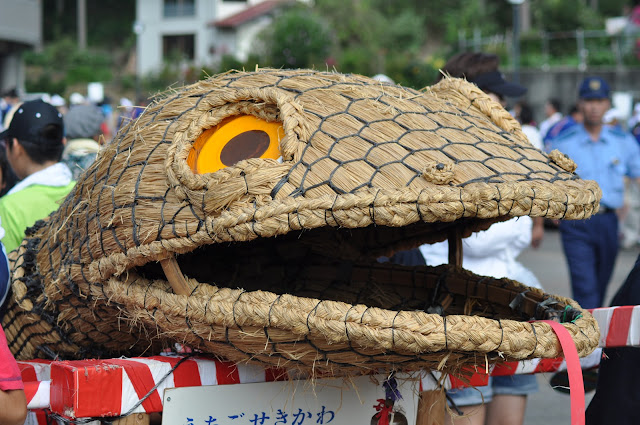