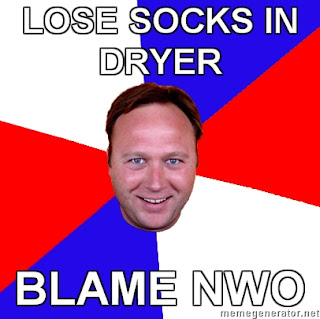 In the infamous and hilarious Alex Jones' debacle on Piers Morgan's show recently, Alex Jones starting throwing out false flag accusations amongst his rantings. A false flag is where a government or organization fakes an incident to make it look like someone else did it in order to justify a certain action in response. This is what a number of ardent gun advocates having been saying - that the tragedy of Sandy Hook was not simply the work of a madman but a government false flag operation in order to start the process of disarming Americans.

The problem with that idea is that a number of these advocates having been saying this same thing about other mass shootings as well such as Aurora and Virginia Tech. Some have been saying this as far back as Columbine. They have said after each of these shootings that these incidences are government false flags which are to be used as a pretext to snatch up all our guns before tossing us into FEMA Death Camps.

If that's the case, obviously the false flags haven't been working too well since it's been 14 year since Columbine and almost 6 years since Virginia Tech and no one has taken our guns away or has really been successful in even trying. Is it because the hardcore gun advocates beat back the sinister New World Order every time the issue of gun control is brought up? This NWO can't be much up to snuff if their evil purposes can be so easily stymied by some boorish loudmouths.

If you are going to come up with a conspiracy theory though, because you think such mass shootings are not the random acts of crazies but rather diabolical schemes you have to think to yourself - Who is really benefitting here? The government? The evil shadowy overlords who want to disarm us? They either must be very patient or very incompetent since most mass shootings from Columbine onwards have netted no real significant results in gun control except a lot of talk and very little to no action. These evil overlords don't seem to have benefitted much if at all from these mass shootings. What small amounts of regulation they have gotten is minimal for all their efforts.

However, let's look at who has directly benefitted and tremendously at that. After every mass shooting, while gun control gets tossed around and nothing much happens, gun sales go thru the roof. Coincidence? Was Sandy Hook a reverse false flag so gun manufacturers could get a Christmas bonus? If you want to imagine the "big bad gubermint" being so callous that they would kill people for their shadowy NWO purposes, why not imagine the possible instigators in this false flag scenario to have been the very people who have been directly profiting off every single mass shooting incident? You have to admit that after 14 years with little to no real gun regulation, the shadowy NWO has been kind of sucking at their nefarious disarm the populace scheme while gun manufacturers have been rolling in it all this time.

And all the gun control debate which follows every mass shooting just further fuels guns sales as gun owners will (in sheepish fashion) rush out and buy whatever gun is in danger of being banned. After the Arizona shooting in 2011, gun sales skyrocketed especially of Glocks. After Sandy Hook, it's AR-15s and similar types which are in danger of regulation or banning.

And where do fervent gun advocates like Alex Jones and Ted Nugent fit in with this conspiracy theory? Simple. First they appeal to the patriotic side of gun owners by quoting the 2nd Amendment and spouting out-of-date quotes of the Founding Fathers which are often out-of-context. Then they feed the fear that many of their supporters have of a rogue government, NWO, black helicopters, FEMA death camps, etc... and tell them after every mass shooting that the government is going to use the incident to take all of our guns away. "We must fight tyranny!" they will shout and this spurs gun owners and those fearful of shadowy evil governments to rush out and buy more guns.

According to this report:
http://www.csmonitor.com/USA/DC-Decoder/2012/0725/Why-gun-sales-spike-after-mass-shootings-It-s-not-what-you-might-think

"But a bigger factor [for the increase in gun sales after mass shootings], say gun dealers, is fear of something else:  politicians – specifically, their ability to enact restrictions on gun ownership and acquisition of ammunition."

Also interesting:
"Gun dealers, in fact, owe a lot to Mr. Obama. Before his election in 2008, gun sales spiked in anticipation that he would promote a gun-control agenda – even though he did not campaign on the issue and theSupreme Court had just handed down its landmark Heller ruling, which asserted an individual right to keep and bear arms."

The fear of Obama being this great anti-gun president that addled-brain Ted Nugent claims he is has been a boon to gun dealers and manufacturers. If McCain or Romney had won their election campaigns, gun sales wouldn't have shot up as much. Maybe gun dealers/manufacturers unbeknownst to Obama rigged the election to ensure the massive amounts of profits they would receive with him in office. It's brilliant because Obama hasn't had to do anything to make gun sales go up because gun dealer stooges like Ted Nugent are doing it for him.

If any gun regulation comes about from all this it will probably be relatively weak but this won't stop the gun dealer stooges from stoking the fires and getting gun owners to stock up on guns before the such regulation goes into effect and afterwards stocking up on other guns not under regulation or which have been banned.

In short, the NWO conspiracy of the government being behind mass shootings is a scam - a very profitable scam. 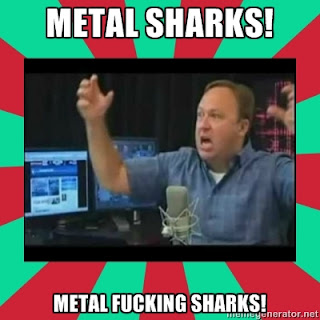