On September 18th in Kamakura at the little Goryo Shrine a small but unique festival is held where the participants wear masks which are over 200 years old. The festival is known as Menkake Gyoretsu or Masked Procession. The festival is of uncertain origins but what is certain is that the shrine itself goes back to the late 11th Century. The enshrined kami is that of a famous warrior of the early samurai era - Kamakura Kagemasa popularly known as Gongoro. In fact the locals usually refer to Goryo Shrine as Gongoro Shrine.

Gongoro was born in Kamakura hence his name and at a young age went to Tohoku to fight for his patron clan, the Minamoto. In one battle Gongoro was struck in the eye with an arrow and he supposedly killed the enemy who sent the offending arrow. Later, a comrade in trying to remove the arrow place a foot upon Gongoro's head which nearly got the fellow killed when Gongoro tried to stab him. Gongoro felt placing a foot upon a samurai's head was a grievous insult whereas to die from an arrow in battle was a noble fate for a warrior. Eventually the arrow was removed and some sources say his eye eventually healed.

Those familiar with kabuki may recognize the name from one of the most recognizable character plays in kabuki tradition - Shibaraku. In the short play Shibaraku, the character Gongoro makes a grandiose entrance and his features are what many people have come to associate with quintessential kabuki - white face with striking red stripes. The festival on September 18th is held in honor of this great warrior.

However, the story of the masks supposedly comes from another origin sometime later. The city of Kamakura didn't truly come into its own until a century after Gongoro. After a period of decline in the fortunes of the Minamoto clan, they defeated their mortal enemies in war and the head of the clan, Minamoto no Yoritomo, set up his headquarters in Kamakura. It was here where the power of the land resided in the new military shogunate government with the samurai as the governing class.

Yoritomo was a strict ruler who often ruled with an iron not too mention bloody fist but he had a soft spot for the ladies especially young ones. Apparently one young girl met his fancy and she became part of the family in a round about but direct way. Due to this her family was allowed to join the Shogun's retinue whenever he visited Gongoro Shrine. The young girl and her family were of common stock, however, so they had to wear masks to hide their lowly status hence the Menkake Gyoretsu festival today.

Whether that story is true or not, the Menkake Gyoretsu is an interesting festival to see. Before the procession, one can see kagura (shinto ritual dance) performed before the shrine around one in the afternoon. The Procession starts around 2 or 2:30 and is rather short as it is a very local festival - just incorporating the surrounding area of two streets. 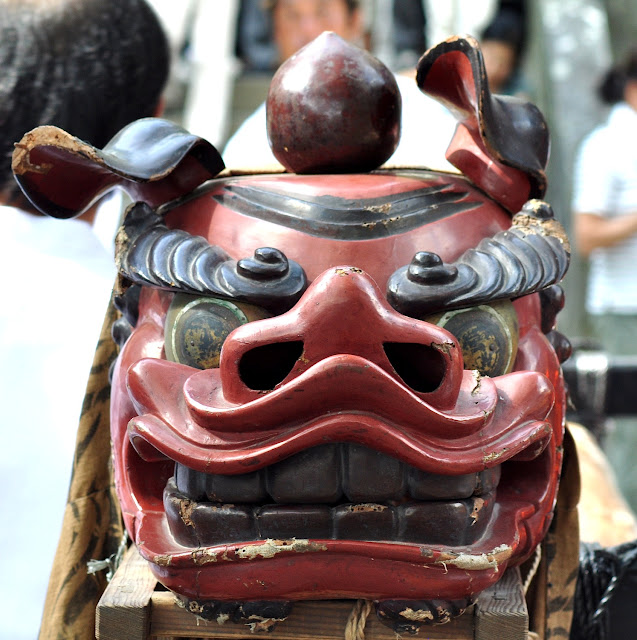 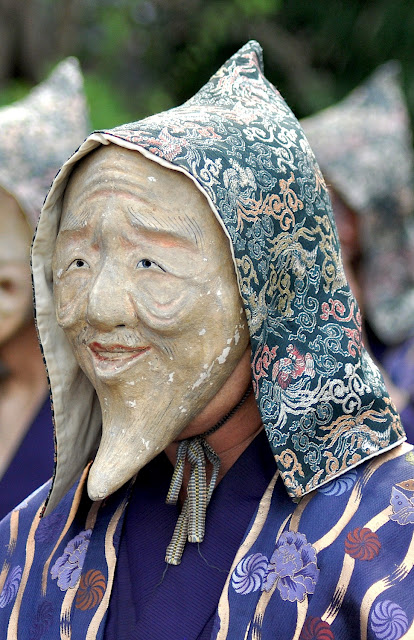 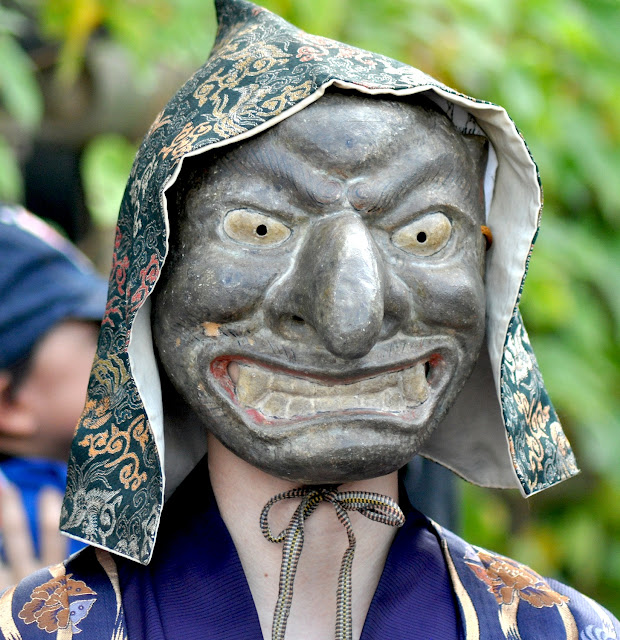 Igyo - man with a monstrous appearance 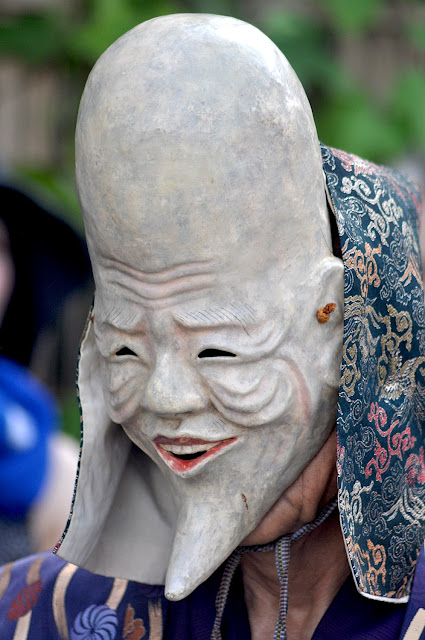 Fukurokuju - One of the Japanese Seven Gods of Luck 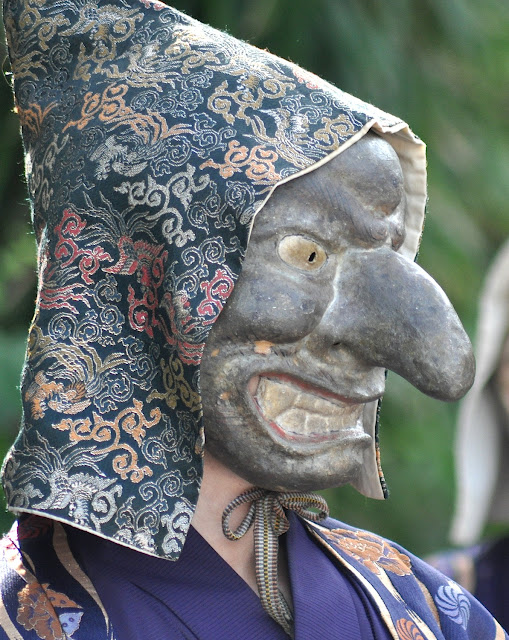 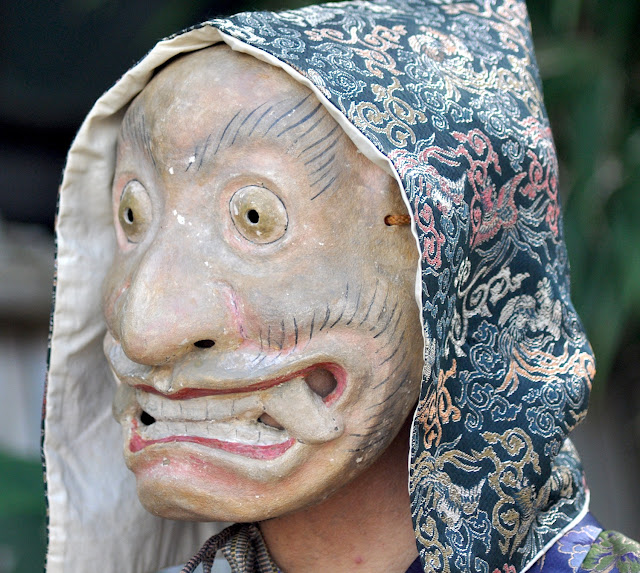 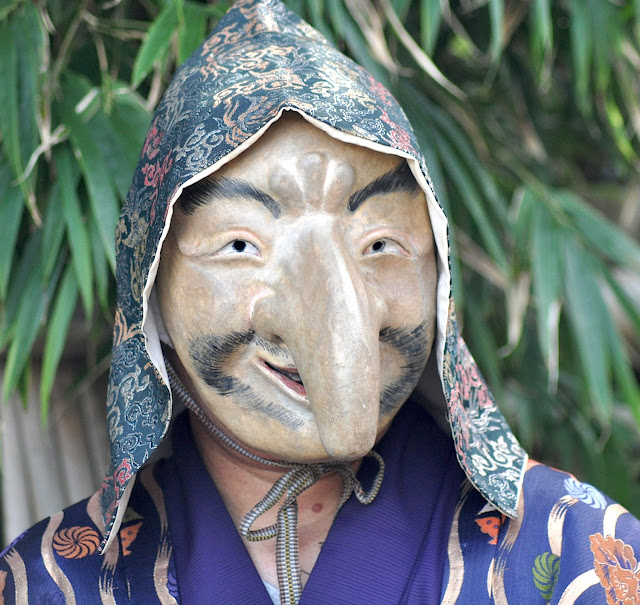 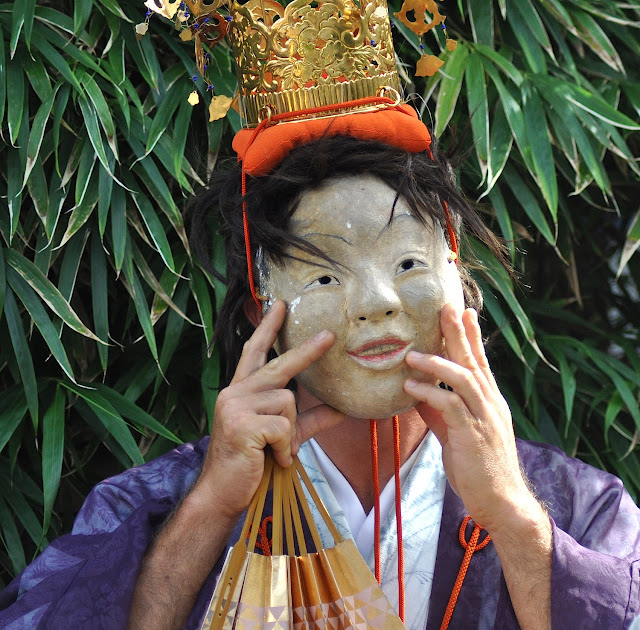 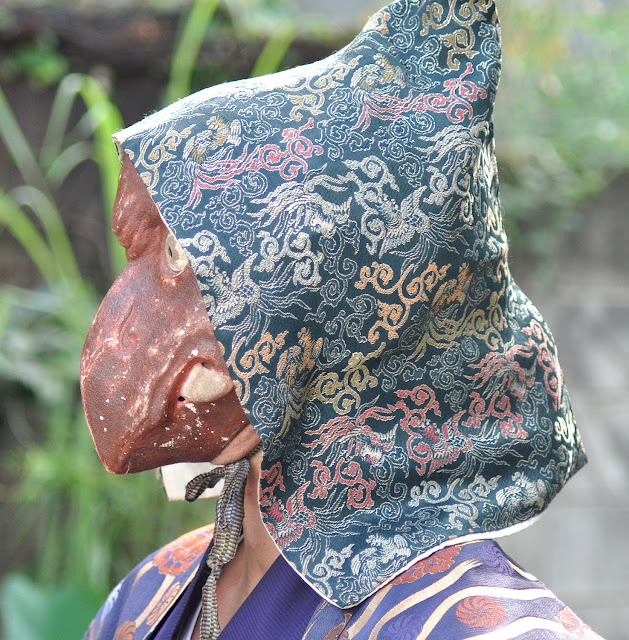 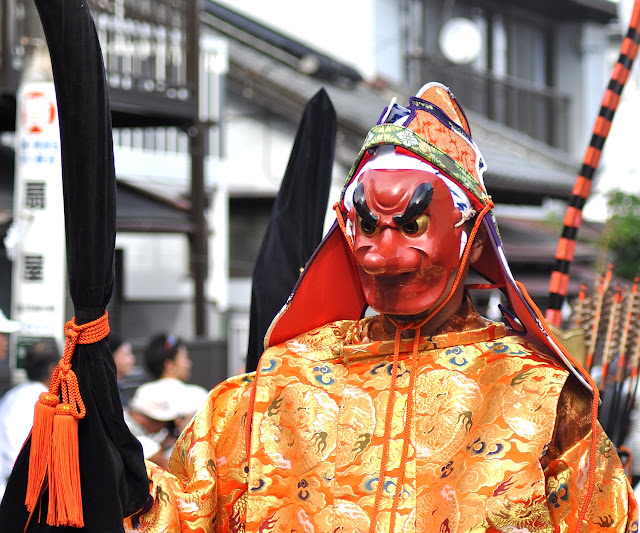 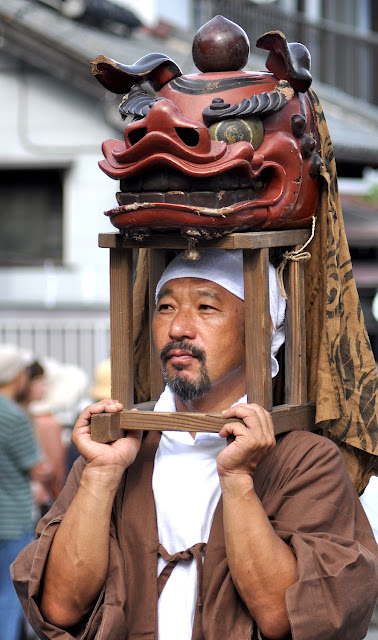 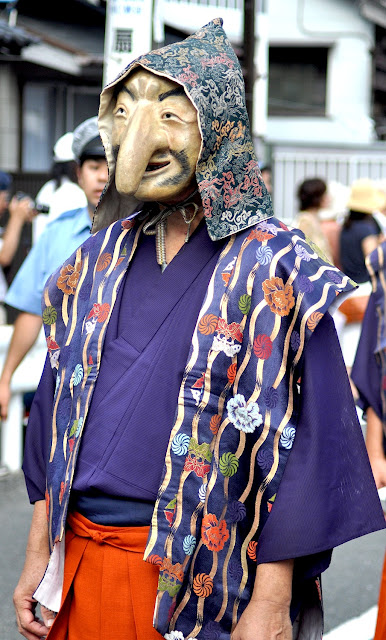 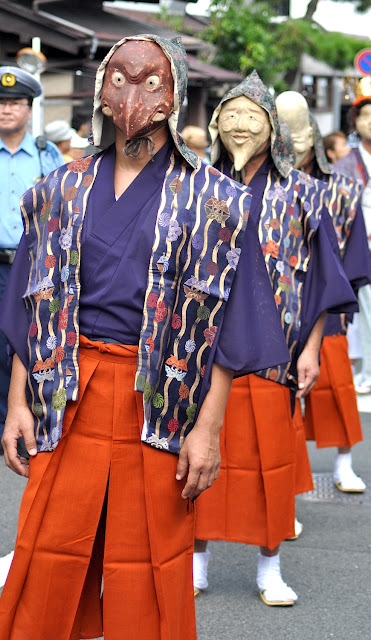 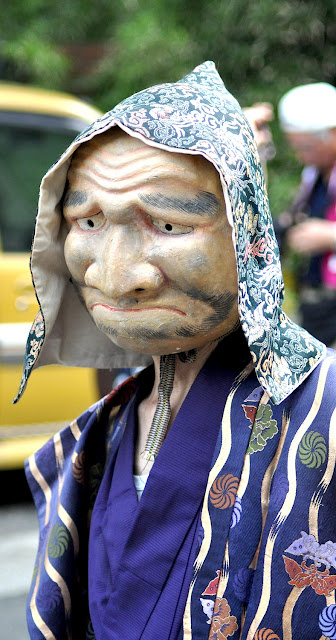 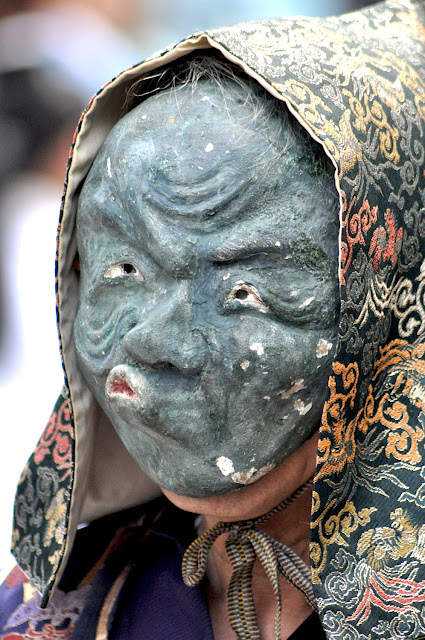 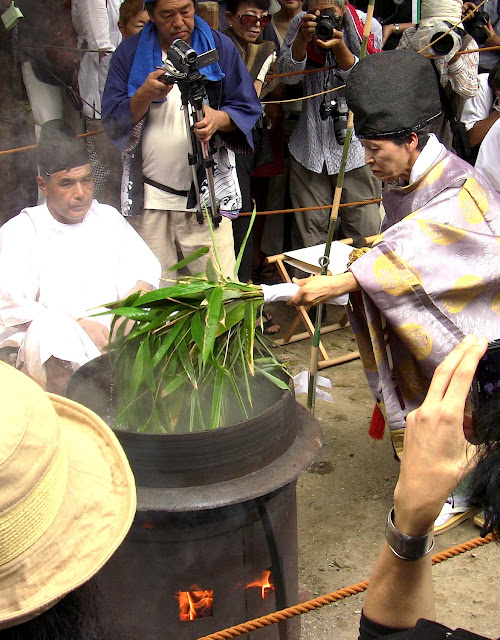 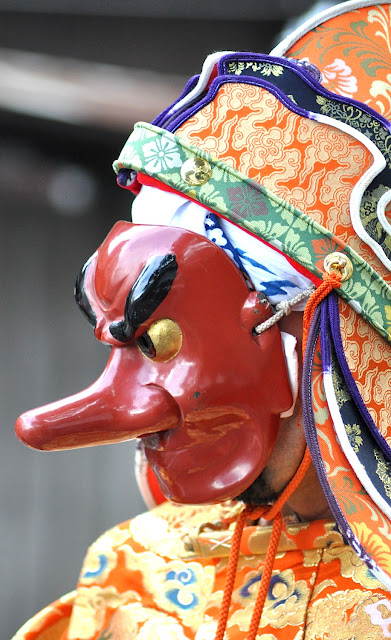 The Long Nose Tengu is associated with the Shinto god Sarutahiko Okami. In the Age of the Gods, the sun goddess, Amaterasu Omikami, sent her grandson, Ninigi no Mikoto to Japan to rule it in accordance with heaven. Ninigi's procession was met by the great earthy deity Sarutahiko. He offered to lead Ninigi to the land safely. Today in the mixed form of the Tengu, he often leads shrine festival processions and ensures their safety. Okame is derived from the Shinto goddess Ame no Uzume no Mikoto, the goddess of mirth. Legends say she brought the sun back into the world with an amusing dance when the sun goddess fled into a cave. Okame's pregnancy is a symbol of good luck for upcoming harvests and childbirth. 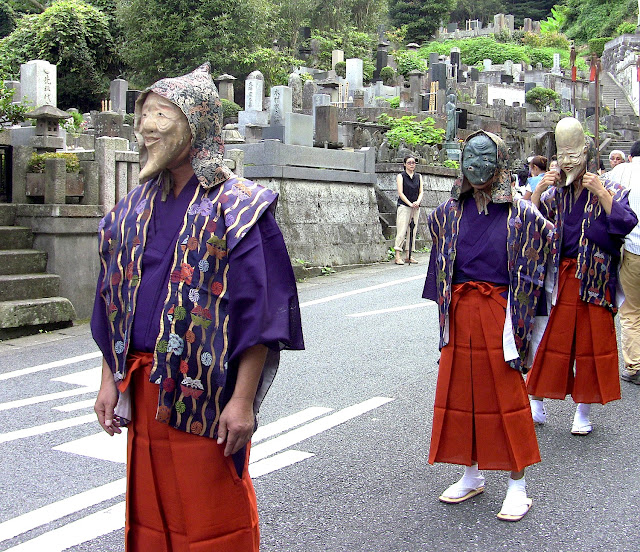 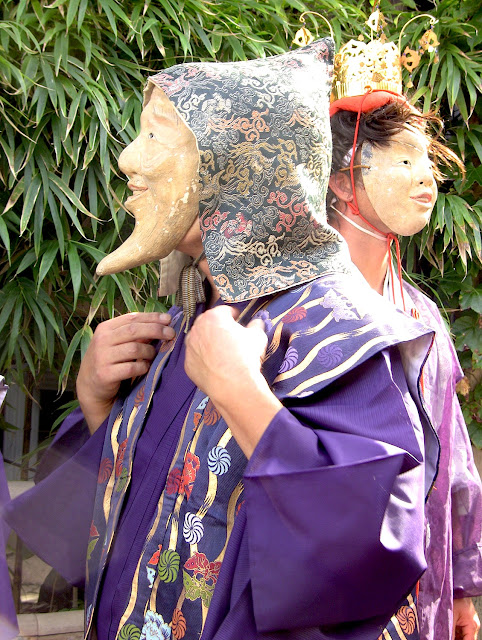 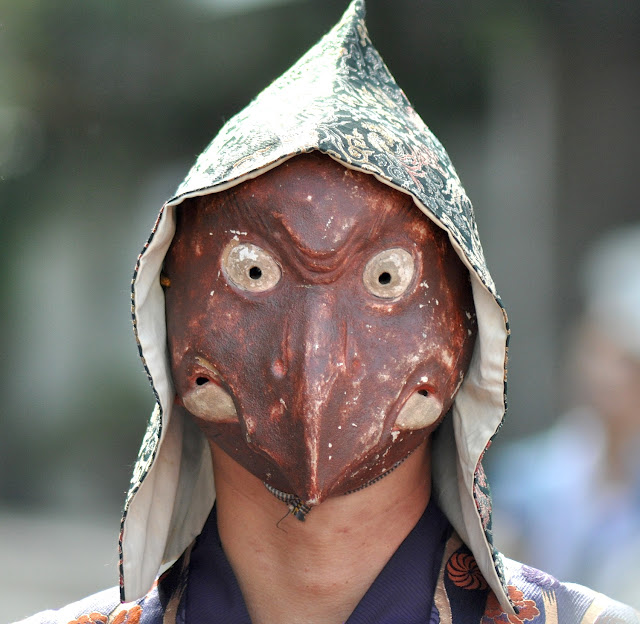